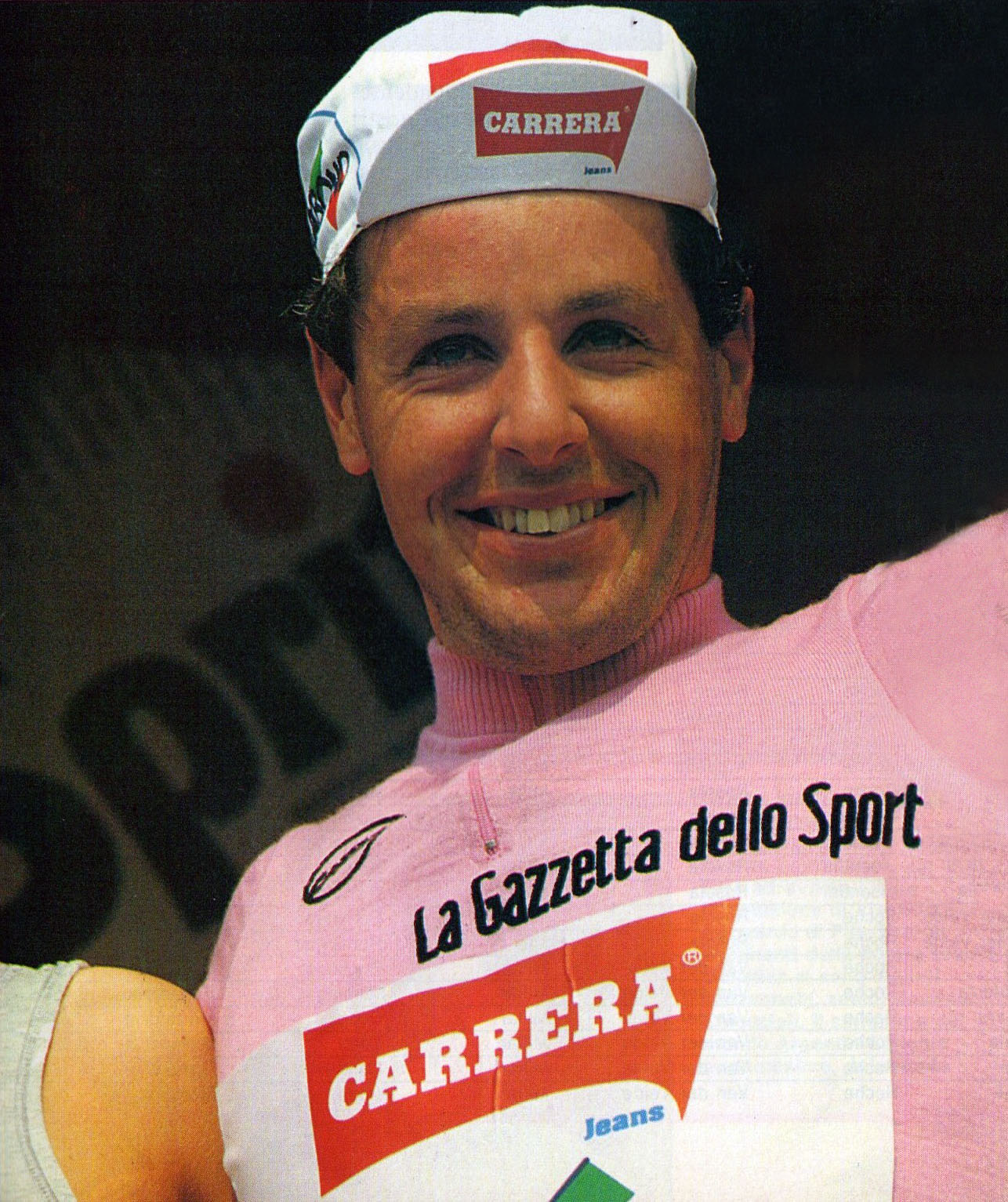 Visentini started off the better of the two by winning the prologue only for Eric Breukink to take the Maglia Rosa off him on stage 1A. Roche won stage 1B, another prologue distance time trial, but the Dutch rider stayed in the race lead until the team time trial on the third stage. Carrera showed their supposed strength that day by beating the second placed team Del Tongo by 54 seconds which meant it was now the turn of Roche to go into pink. He lead his teammate by 15 seconds and the tape holding the strong unit together was starting to come undone.

Over the next few stages Roche began getting more and more annoyed with Visentini, who instead of protecting him as race leader was glued to his back wheel. Even so, Roche managed to increase his lead slightly to 25 seconds by the end of stage 12 which was the eve of another time trial, this one at 46 km.

Visentini was excellent that day and beat Tony Rominger, an expert in the race of truth, by 1 minute 11 seconds but Roche by contrast was awful. He blamed a crash three days earlier on his performance but the thing that mattered was that he lost almost 3 minutes to Visentini who was now back in the Maglia Rosa and lead the Irishman, in second, by 2 minutes 42 seconds.

The Carrera team manager Davide Boifava made his decision and told the team, as if it needed to be said, that Visentini would be the leader for the rest of the race. It seemed the civil war was over but Roche and Schepers were planning a mutiny and they decided it would take place on the fifteenth stage which finished on Cima Sappada.

The day included the Monte Rest then the Valcalda before the finish and it was clear early on what plan the two Carrera renegades had concocted. On the descent of the Monte Rest Roche went on the offensive and along with Ennio Salvador and Jean-Claude Bagot he managed to force a gap from the bunch. Roche had made his move and was trying to put distance on his team leader. Both his breakaway companions weren’t on his team but seemed keen to help. Usually trying to escape with such a high profile rider would be a futile task but earlier on in the race Schepers had helped Bagot win a stage. The wily Irishman was calling in favours from other teams as his own couldn’t be counted on.

Boifava had clocked Roche straight away and drove up to him to tell him to drop back to the bunch or he would get the team to chase him down. Roche said if he was allowed to continue and the team held back he would gain so much time in the stage that he would win the Giro for Carrera. His manager disagreed and ordered the team to start a ferocious chase. The team pushed itself to the limit trying to bridge up to Roche and eventually Visentini who was having an off day started to crack.

Roche and his two companions were burying themselves too but his plan soon came to fruition as Visentini and the Carrera boys ran out of steam and couldn’t keep up with the chasing pack who would eventually catch up with Roche. Among those who joined him at the head of the race was Robert Millar of the Panasonic team, another rider who he could count on for a little support up the final climb. At the end of the day after expending so much energy the Irishman finished only 56 seconds behind the stage winner Johan van der Velde.  Visentini was down in 58th spot at 6 minutes 50 and tumbled to 7th in the GC. Roche was back in the Maglia Rosa but only had a slender 5 second lead over Rominger in 2nd while Breukink was 3rd at just 38 seconds.

Italy went into meltdown. Roche hadn’t only attacked a teammate in the Maglia Rosa, he had attacked an Italian teammate in the Maglia Rosa. He needed police protection after the stage finished (and for the next few days and would get spat on and punched from the road side). Boifava was also incensed. Not only had Roche disobeyed him but the outcome of his madcap plan was that Carrera had gone from being 3 minutes 12 seconds ahead of their nearest rival to only 5 seconds. He threatened to stop Roche from riding the Tour if he didn’t come into line while Visentini told the press that Roche would be going home that night.

The next day on a stage with five climbs Visentini gave Roche a taste of his own medicine by constantly attacking the pink jersey but Roche was equal to every move and the two finished on the same time. Rominger lost over a minute though and his plan seemed a little more justified. Over the next few days Roche had to rely on Millar for protection in the mountains and Schepers the rest of the time. Visentini was still seething and even tried to make Schepers crash at one point.

However, it seemed Roche’s Carrera ‘teammates’ were slowly coming round to the thinking that the Irishman was stronger than Visentini. By the end of stage 18 the Italian was 3 minutes 24 seconds behind in 7th. The second placed rider Eric Breukink was only 33 seconds back and if they were to get a decent bonus they would have to unite behind Roche. His extra support showed on the penultimate stage when he finished second behind that years winner of the mountains classification Robert Millar but over 2 minutes ahead of Breukink and six ahead of Visentini who had crashed and broken his wrist.

He would go on to win the Tour and the World Championships that season becoming one of only two riders, the other being Merckx of course, to win the ‘Triple Crown of Cycling’. Visentini wouldn’t have a major victory again and retired in 1990, hardly discussing the sport again. However the tifosi still talk angrily of the Irishman for his betrayal on their soil.