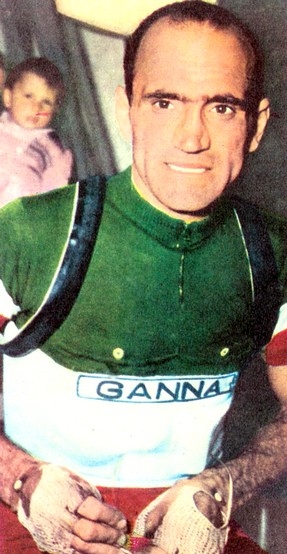 With Italian race fans largely being split between Coppi and Bartali there wasn’t much space for anyone else to join in the popularity stakes. Magni wouldn’t have fared so well anyway. He wasn’t particularly interesting during interviews, he was no bowl of fruit and balding (though there’s nothing wrong with that) and his name was tainted by an episode which happened during the war. He was a fighter for a fascist militia which was responsible for slaughtering eighteen partisans in the ‘massacre of Valibona’. His exact involvement in the incident isn’t known but as there was a very public trial after the war to find out what happened everyone knew he was there, and as a fascist soldier.

In the last stage of the 1948 Giro Fiorenzo Magni was in the pink jersey and about to enter the Vigorelli velodrome in the lead group to contest the final sprint. Would winning the Giro on his second attempt see a surge in his popularity? That question was answered as soon as he entered the arena to a chorus of boos. After Magni won the sprint the crowd got even more vicious and the rider was reduced to tears as he got escorted away by the police. The fans reaction had nothing to do with what happened during the war though, it was a result of the stage two days before, and how their man Fausto Coppi reacted to it, which had made them call for blood.

Stage 17 from Cortina d’Ampezzo to Trento would go over the Falzarego then the Pordoi, which is today’s first climb. Fausto Coppi had been riding himself into some great form in the days leading up to the stage after starting his defence of the Giro title a little out of sorts. At one point he was over twelve minutes behind the leading rider Ezio Cecchi but after winning the previous stage his deficit was now down to 8 minutes 29 seconds and was 6 minutes 11 behind Magni in second place. With Coppi’s history of gaining chunks of time during solo attacks it seemed that the race was on.

Attacking over both passes Coppi arrived at the finish alone and over 2 minutes ahead of the first chasing group. Cecchi finished alongside Coppi’s nemesis Gino Bartali 7 minutes 20 behind Coppi which meant he should have retained the pink jersey with a 1 minute 9 second advantage over Coppi. That would have been the case if Fiorenzo Magni hadn’t have finished in the second group. He had. Coppi couldn’t believe he had, thinking he was too weak a climber to finish so closely to him. But as things stood Magni had moved into pink with 2 minutes 11 over Cecchi and 3 minutes 20 over Coppi.

Soon after the finish word spread that Magni had been helped up the Pordoi. At first details about what happened were pretty sketchy but there were suggestions that he had been pulled by a car. The race jury investigated the claims and without any television evidence they had to rely on fans and riders testimonies. Many of them said the same thing, that Magni had been pushed up the mountain by people at the roadside. Soon it emerged that Magni’s team, Wilier-Triestina, had bused in a load of fans to the mountain. They said it was a promotional thing but others suggested that the fans were dropped off at strategic points on the climb. The jury agreed that something was up and Coppi’s Bianchi team expected the harshest penalty possible. However only two minutes were docked off Magni’s time leaving him in pink by a slender 11 second margin.

Coppi and his team were livid and left the race in protest, a decision which shocked everyone. Fans were incensed that their man had been ‘forced’ to leave the race and newspapers proclaimed that the years edition of the Giro was over. And of course, everyone’s anger was taken out on Fiorenzo Magni.

It’s hard to know exactly what happened. Did his team set things up for him to be pushed? If so how much of a say did he have in it? Was it as bad as Bianchi were making out?

One thing is for certain. The backlash effected Magni in the short term but made him tougher in the long run. Over time his never say die attitude would win him plenty of respect and he retired with a pretty impressive palmarès all things considered.

Spare a thought too for Ezio Cecchi who finished 2nd by only 11 seconds, the smallest winning margin in Giro history. Coppi, Bartali and at times Magni were so dominant in that era that every story ends up being about them. But if Magni was really up to high jinx it was actually Cecchi who was the big loser and not Coppi, as everyone at the time made out.