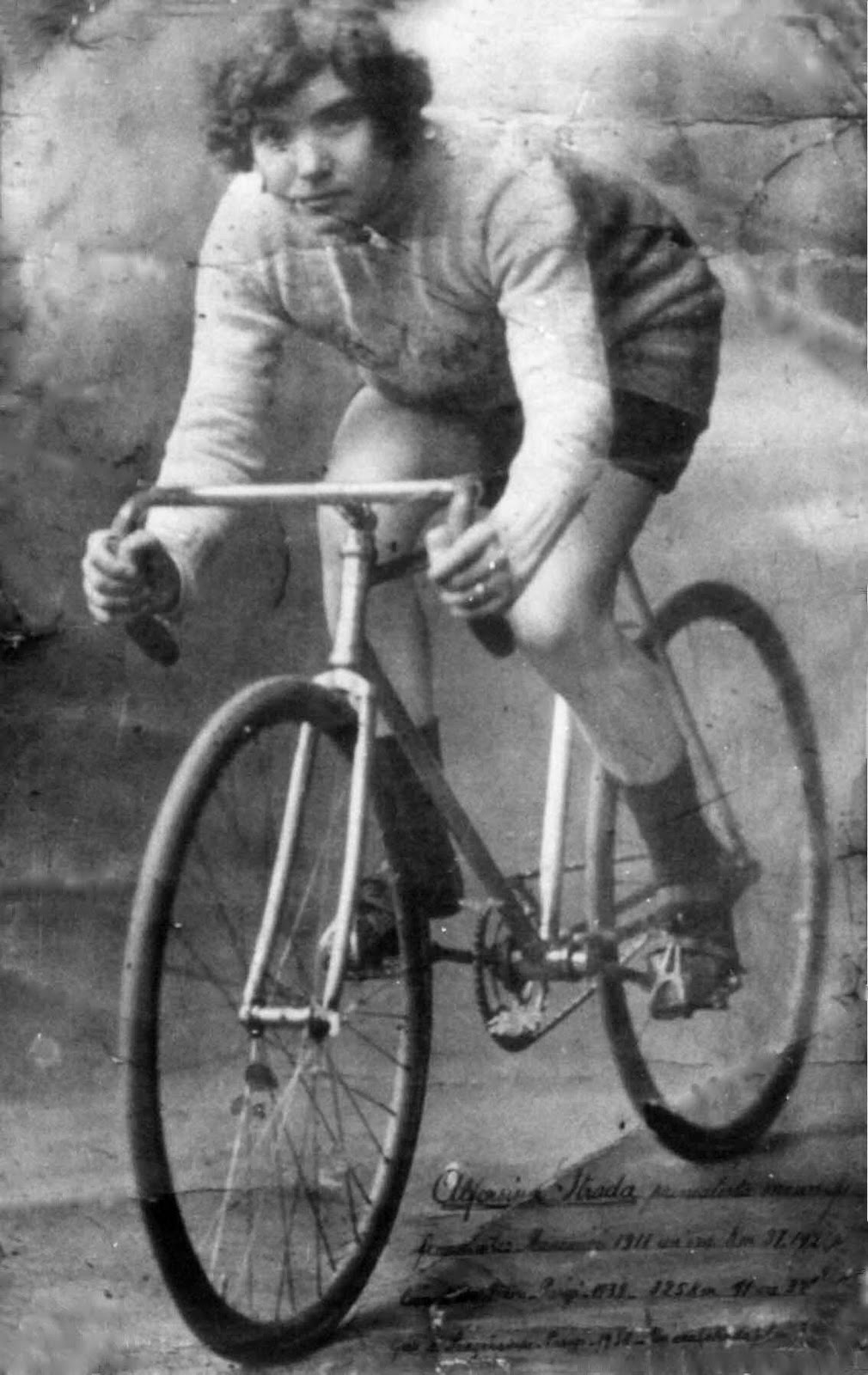 The route itself would be one of the toughest yet being one stage and 400 km longer than the previous year and including some roads down the heel of Italy’s boot which weren’t in the best of shape. This didn’t stop 90 riders from entering, which was how many the organisers had wanted. The race director had succeeded in getting the Giro running despite the rider strike but with the absence of top names his employers would have been hoping there would be enough excitement in the race to sell their paper.

There were many Giro debutantes and unknown names on the start list including the rider given the 72 number, Alfonsin Strada. This was actually, and apparently unknown to the organisers, Alfonsina Strada who had changed her name to look like a mans and gain entry into the race. It was claimed at the time her true identity wasn’t known until she took to the start line in Milan. Her presence caused quite a stir, this was the 1920’s and opinions on the issue of her racing the Giro were caught between Italy’s fascist leaders trying to promote a macho image of the country and the more conservative populace who had ideas of where a woman’s place should be. Since taking up cycling she’d had to endure abuse and apparent ‘banter’ for the simple reason of being a female on a bicycle. So it was incredibly brave of her to just register for the race and put herself in the spotlight where she would have to face peoples sexist agendas never mind want to actually ride the course. Thankfully for Strada the organisers, realising the publicity that her inclusion would generate, were more than happy to let her go ahead and race.

Born Alfonsina Morini in 1891 into a family of two girls and eight boys she quickly developed into an athletic and competitive character. She developed a love for the bicycle at a young age, often borrowing her fathers, and saw it as a way of escaping a male dominated world. Desperate to avoid the life of a seamstress that her mother had planned for her she was delighted when her father bought her a bike of her own. Soon after at the age of thirteen she started entering and winning bike races. in 1915 she married another rider and racer, Luigi Strada, and he was happy to support her in her desire to race for a living. On her bike she was hugely successful. She set an unofficial hour record in 1911 and even completed the Giro di Lombardia in 1917 and 1918, finishing in the final group of seven riders but only 23 minutes behind the winner in her second appearance there. She was ready and capable of competing in the Giro, she wasn’t just there as a side show or circus act.

Strada started well in the race, she lost chunks of time, sometimes more than 2 hours, to the stage winner each day but was by no means the worst rider and was finishing way above the time cut. By the end of the fourth stage into Naples where she finished 56th almost 30 of the original 90 riders had already abandoned. After Naples the route headed to its southern most point, Taranto, before turning north again along the east of the country with stage finishes in Foggia and L’Aquila. The race was now over the half way point and Strada was still there. She was mountains of time behind the leader Giuseppe Enrici but this was a Giro of massive time gaps. The GC battle had been an exciting one between Enrici and Federico Gay and only 1minute 8seconds separated them but Angelo Gabrielli in third was over a hour in arrears.

Stage 8 to Perugia was a pivotal point in the battle between Enrici and Gay as well as for Alfonsina Strada herself. The weather conditions were terrible with strong winds and heavy, stinging rain. The road conditions were terrible too, most south of the Po river and the rich North were, and the rain turned them into torrents and made them impossible to pass through by bike in many places. Strada suffered from a number of crashes and flat tires but showed her strength and determination to carry on even repairing her handlebars with a broom handle after they broke at one point. Unfortunately she finished well behind the time cut and this was perhaps due to the stage winner Enrici being so strong on the day. His battle for the overall with Gay had been won as he added 39 minutes to his advantage on Gay who was 10th in the stage.

The race director had wanted to keep Strada in the race to reward her courage but the race jury were keen to apply the rules so her Giro was over, officially at least. The organisers asked her to continue, she had been great publicity for the race and newspaper, but kept her off the classification. Determined Strada of course agreed. The number of fans who came to get a glimpse of her and cheer her on grew as the race continued and at the end of the 10th stage when she crossed the line in tears after suffering another bad crash the crowd lifted her off her bike and cheered her name.

She made it all the way to the finish cycling all 3610 km of the route. She had lost 38 hours to Enrici. Only 30 of the 90 riders who started out the race reached the finish with Telesforo Benaglia in last spot 21 hours behind the winner Giuseppe Enrici.