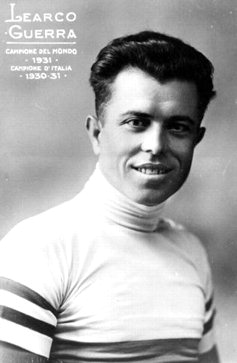 Now that the 100th Giro d’Italia has reached the 6th stage there have been opportunities for riders to do something special which means the record books need to be updated. Lukas Pöstlberger became the first Austrian to win a stage as well as the first to lead to race. There have in fact been been three riders to lead the race for the first time. Before the 1st stage there had been 259 different riders to have led the Giro over its 99 editions. That number will have to change but so will the total for the number of riders to have worn the Maglia Rosa. Only 237 riders have worn the pink jersey as leaders of the Giro because the first one wasn’t awarded till 1931.

In 1930 the Gazzetta dello sport who were the organisers of the Giro d’Italia decided that the leader of their race should be easily identified from the rest of the riders. It would add excitement for the fans at the roadside but also give the newspaper something new to talk about and increase its sales. So the idea of the Maglia Rosa was born. The colour pink was chosen because it was the same colour as the paper that the Gazzetta was printed on.  There were some high up officials in the fascist party, who wanted to promote Italy as a macho country, that thought it a too delicate colour for a sports contest but the decision had been made and the Maglia Rosa would be used in the 1931 Corsa Rosa.

The honour of being the first rider to lead the Giro in pink fell to Learco Guerra. He had perhaps unfortunately arrived on the scene at the same time as the great champion Alfredo Binda. Binda was utterly dominant in his homeland leaving his rivals to fight over the scraps. He had a huge fan base but there were cycling fans who didn’t want to see the same rider winning the whole time, preferring some decent competition. They became big supporters of anyone who could challenge Binda. An aging Costante Girardengo was the first to come close to matching him but it was Learco Guerra who put up the best fight and made the best anti-Binda.

As with many aspects in Italy at the time which had very clear dividing lines like fascism and socialism or wealth and poverty cycling fans were divided between fans of Binda and fans of Guerra. Guerra being the underdog had a huge fan base in the poor South, the area which the Giro starts going through today.

Guerra’s professional cycling career started relatively late in 1928 when aged 27 he joined the Maino team. Before that he had ridden amateur races as an isolati, meaning on his own without a team. He was two months older than Binda but when Guerra turned pro Binda had already won two Giri. He quickly became known for his strong riding over flat stages and gained the nickname ‘The Human Locomotive’. In 1929 he entered his first Giro riding primarily as a gregario and finishing 24th. The year after he finished 9th and bagged two stages. This along with his second place and three stages in that summers Tour de France hinted at what a prolific stage hunter he was to become. It also made him one of the favourites at the start the 1931 edition to win the first stage and pull on the races swanky new jersey.

The stage was perfect for Guerra, a primarily flat 206 km run from Milan to Mantova. His main rival would be, as was now usual, Alfredo Binda. After just over six hours of racing six riders had a slender advantage over the rest of the field coming up to the finish, Binda and Guerra among them. At the line it was Guerra who got one over his adversary. It didn’t happen often but when it did the prize was big. His name would remembered for ever as the wearer of the first pink jersey.

In all Guerra won 33 stages at the Giro (8 behind Binda) and the overall once in 1934. He could have possibly won more Giri if time trials were more of a thing in stage races back then, his other nickname was the ‘Human Stopwatch’ and he was an expert in the race of truth. He won the World Championships in 1931, a year when the race was unusually run as a time trial. It was a staggering 172 km race against the clock in flat Copenhagen where the rules said the riders weren’t allowed to carry water with them. These conditions were perfect for Guerra though and he won by 4m 37s. In 6th place nearly 9 minutes back? Alfredo Binda.

Tomorrow – The story of the Maglia Nera, the Black Jersey.

2 thoughts on “Giro 100. The Maglia Rosa And Learco Guerra.”