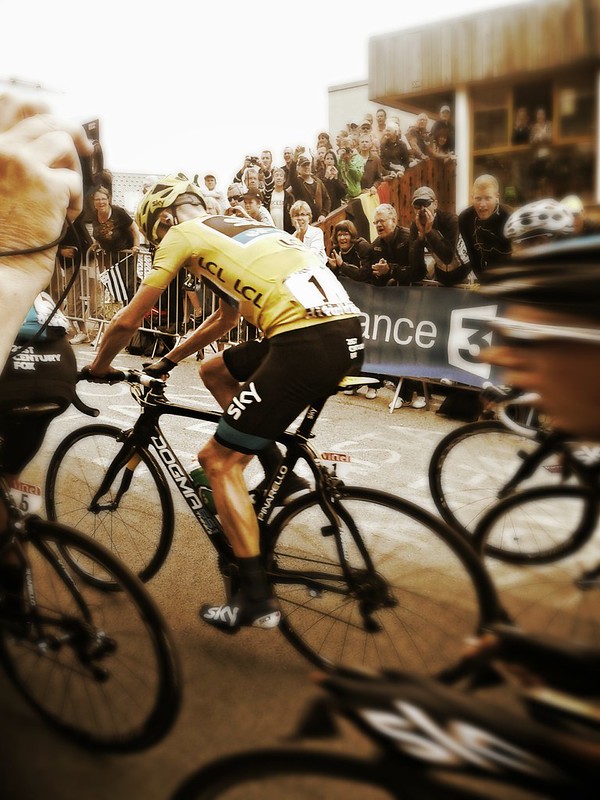 The first Saturday of July is almost upon us. A date millions of sports fans across the world have been yearning for, as nothing major has been happening since the start of the summer. Le Tour de France starts and while it is back in its traditional spot on the cycling calendar the location of the Grand Depart is highly irregular. Unfathomably the race begins in Leeds! Not Le Eds but Leeds, Yorkshire. As a traditionalist this is a little hard for me to take. Everyone surely knows the rightful city of departure should have been Edinburgh. So as I learn to live with this oversight from the organisers over the next three weeks what can I expect from the race itself?
The route of La Grande Boucle has also been taken in a new direction. Instead of being a great loop the route map resembles a squiggly j written by a Doctor, hopefully not Michele Ferrari. A quick look through the 21 stages will show you a lack of some of the Tours more famous mountain top finishes and may lead you to think that it will be substandard race . This years Tour will be different but far from boring. There will be five stages finishing on category 1 or HC mountains, the hardest ranked climbs. Furthermore, only four of the other stages can be described as truly pan-flat, one of which has cobbles, and the only time trial will be run on the penultimate stage instead of early on in the race ensuring experts against the clock can’t gain an early advantage then boringly defend their lead in the mountains, not that Bradley Wiggins is going to be in the race. So there are going to be plenty of opportunities along the route for exciting, attacking riding that should make this a tour to remember.

While the tours first week is usually run over flat terrain where the sprinters excel and the yellow jersey favourites stay quiet bidding their time, this year things should hot up as early as the second stage. Nine categorised climbs will be tackled between York and Sheffield including the famous Cote d’Oxenhope Moor, The 2nd Category Cote de Holme Moss before the fearsome Cote de Jenkin Road just 5km before the finish line. While this should make things interesting it is still early on in the race. As the old saying goes, ‘The tour wont be won on the roads of Yorkshire’. Though unfortunately for some fans at the roadside plenty of Strava KOM’s will be gained. One day where the race could be lost is Stage 5. The route runs from Ypres to Arenberg Porte du Hainaut and will commemorate those who fought in the First World War. Over 15km will be run over some of the cobbles used in the Paris-Roubaix race. These sort of conditions require strong riding and plenty of concentration so those unprepared could crash out for an early exit. It wouldn’t be a surprise if a top rider doesn’t make it past this day. Other days not to miss are Stage 10 to La Planche des Belles Filles, where Chris Froome kicked Sir Brads arse two years ago and started the feud between them that lasts to this day, and the final two mountain days on Stages 17 and 18 where the riders will battle over the Col de Peyresourde, the Tourmalet and Hautacam. This should all set things up nicely for a afore mentioned time trial on Saturday the 26th of July.
Who can be expected to be in contention at this point? Welcome to my comprehensive guide of the main contenders for the three main competitions.

The Polka-Dot Mountains Jersey:
Does anyone actually care?

The Yellow Jersey:
There are three clear favourites in this years race. Chris Froome, Alberto Contador and Vincenzo Nibali are perhaps the top riders of this generation and this will be the first time they compete against each other at a Grand Tour. Out of the trio Nibali has the best nickname but ‘Nibbles’ will have to improve his early season form to be able to challenge ‘El Pistolero’ and em ‘Froome Dog‘. As defending champion, Chris Froome will be the odds-on favourite for the race but he and the rest of his Sky team have been fragile at times this year, partly down to their strict diets and 0% body fat, and seem to pick up injuries and illness quite easily. Perhaps when Froome is staring down at his stem as he’s racing around the world all he’s thinking about is when Sir Dave of Brailsford is going to give him a decent meal. So while Froome resembles an octopus whisking an egg after playing a Sean Kelly drinking game *, when he’s on the bike, Contador is one of the most stylish riders ever seen. Unfortunately this style hasn’t brought him Tour de France success since 2010 when he got a taste for drug laced steaks. His career had stagnated after his dopping ban but he is now putting in performances similar to those in the days when he was winning all the Grand Tours. He would be my tip for victory.
Of the other riders it is one that isn’t appearing which made the most pre-race headlines. With the race starting in his home country and having plenty of success in the Tour in the past surely David Millar merited an entry. Of the Brits actually there watch out for Mark Cavendish attempting to take the yellow jersey in Stage 1 near his mums house, or something, and 21 year old Simon Yates who will be starting the first of many Tours.
Watching how the French riders perform in their home race is always an interesting aspect of the race. With no victories since Bernard Hinaults in 1985 the French public are always on the lookout for their next star. This ensures an exciting atmosphere during the race. Thibaut Pinot and Jean-Christophe Peraud should provide some hope until they ultimately fail in the final week and watch out for ‘Little’ Tommy Voeckler in his final Tour de France. Actually don’t look out for him as he struggles, or pretends to struggle, up the mountains. His gurning face is one of the most distressing sights known to man.
The other riders who may challenge for the podium are Rui Costa in the rainbow jersey of World Champion, Alejandro Valverde who’s dog Piti takes drugs, Andrew Talansky who is a great outside bet and Andy Schleck who actually wont challenge for the podium but he needs a mention in any Tour de France preview.

So now all you need to do is  sit back, pull a few sickies from work and enjoy the 101st Tour de France.

*Take a drink every time Sean Kelly says “Making The Calculation“, “Turd“, “Majorly Difficult” or “Tour Of France”.
*Finish all your drinks if you hear anyone else in the entire world say “Tour Of France”.